Because of Our History, We Have a Bright Future

Here at Lifetime Vision Center, we have had many name changes, changed offices, changed owners, and have had many excellent doctors throughout the years. We hold onto our long history, learn from it, grow from it, and continue to create a brighter future for everyone that walks into our office.

Until 1941, Auburn had only what are called “practical opticians”. These were men who most likely did refractions (the part of your exam where they ask you “1 or 2”), sold glasses and jewelry, and many of them were respected businessmen in the area. The earliest practical optician that we have a record of in Auburn is Samuel H. Avey in 1882.

1999 – Dr. John and Dr. Wright moved the practice to the building it is in today and renamed it “Lifetime Vision Center”

Dr. Pat graduated with his Doctorate in Optometry in 1955 and started practicing in Plainview, Nebraska. In 1957, Dr. Pat moved to Auburn and purchased the practice from Dr. Riggs with the new name “Dr. Crotty, O.D.”

Dr. Pat and his wife, Jeannine, have raised five children, Kathy, John, Doug, Kent, and Paul. They have a lot of grand children and many great grandchildren.

Dr. Pat created the family value foundation that each doctor after him has been able to build on to guarantee that all of southeast Nebraska can have healthy vision. Through innovations and new technologies, the doctors after him have been able to expand on his foundation and increase the care that Lifetime Vision Center is able to provide to all of our patients. 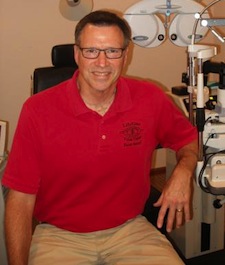 Dr. John graduated from Auburn High School in 1970. He went on to the University of Nebraska Lincoln for 2 years of undergraduate study. He then continued his studies at Pacific University, Forest Grove, OR where he received a Bachelor of Science Degree in Psychology in 1974 and his Doctorate in Optometry in 1976. Upon graduation, he returned to Auburn and joined in practice with his father, Dr. Patrick H. Crotty, OD.

Dr. John continued to build on the foundation of a value-based Optometric practice provided by his Father, Dr. Patrick H. Crotty, so that our community is able to maintain “Lifetime Vision” for generations to come.

You can schedule your next eye exam with us online!

Leave Us a Review

Please take a moment and let us know how your experience was.